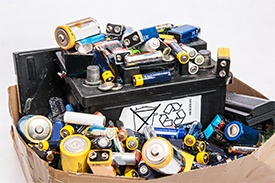 What are batteries? What is their purpose? According to Northwestern University, “A battery can change chemical energy to electricity by putting certain chemicals in contact with each other in a specific way". Batteries utilize the electricity converted to power items such as lights, television remotes, and even cars. There are three main components of a battery, which consist of the anode, known as its negative side, the cathode, known as its positive side, and electrolytes. These segments of the battery keep the flow of electricity through the chemical means of its conversion, with the help of electrons.

The first battery was invented by the Italian physicist Alessandro Volta in the year 1800. This “Voltaic Pile “ was created using discs of copper and zinc, and wet cardboard, producing an electrical current. This was the first “wet cell battery ." Then, in 1836, John F. Daniell invented the Daniell Cell. It lasted longer than the voltaic pile, using copper sulfate and zinc sulfate. It continued to be used within homes for over one hundred years. In 1949, the Alkaline-Manganese battery developed by Lew Urry, which is what is commonly used today.1

There are some examples of batteries used in daily life. The alkaline battery is the most familiar, being used most often. Think of batteries such as AA or AAA. These batteries are made of the materials zinc and manganese dioxide.2 Rechargeable batteries also exist, like in phones or gaming controllers. Lithium-ion batteries are commonly used in laptops and vehicles and are made up, of course, lithium, as well as graphite mixtures and other types of metals.3,4

To truly go into a much deeper understanding of a battery, it must be known how one works. Say, we put batteries into one of said examples, such as a television remote. The batteries are set into the remote, and the remote can be properly used. How does this work? Batteries are to essentially finish a circuit, which in turn lets electricity flow to whatever the circuit was made for; in this case, a television remote. Chemical energy within the battery begins to convert to electrical energy and is then transferred to the remote (energy is converted due to the first law of thermodynamics, which states that energy cannot be created nor destroyed, which gives the explanation to the reason behind chemical conversion and not electrical creation). The cycle continues until batteries run out of chemical energy and are “dead “.5

When charging a chargeable battery, the process of chemical energy conversion to electric energy is reversed. However, like discharging, charging a battery over time can lead to decay and it will no longer store charge. Like a circuit, if this is cut off, the battery won't charge. As a battery charges or discharges, voltage and temperature of the battery increases or decreases, and in physics, can be shown with Delta V and Delta T (delta being the triangular mathematical symbol that represents a change in a variable) which is about how decayed a battery is. For batteries used in cell phones, it is recommended that one does not overcharge their battery for the very reason of speeding up the decaying process, which is well-made advice, as these batteries are not as ubiquitous and cheap as alkaline batteries, and can cost a plethora amount of money.6

Batteries are a way of modern life. They power quite a profusion of everyday things. Without them, life would prove to be much different. Batteries show us just how imperative their creation is to society and the inexpensive innovation it continues to unfold, from now, into the distant future.